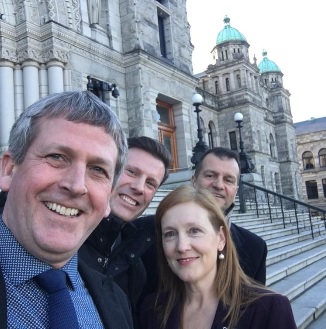 In the days leading up to the 2019 Budget announcement, DigiBC has continued to advocate for changes to the Interactive Digital Media Tax Credit (IDMTC). These include increasing it from 17.5% to 25% with an additional 10% bump up for those opening or running studios outside of GVRD and CRD.

Sam Fisher, CEO of Hyper Hippo, Graham Cunliffe, SVP of Finger Food Studios, Peter Greenwood, CFO of Blackbird Interactive and DigiBC’s Games Group Chair, along with Brenda Bailey, Executive Director of DigiBC, met with the Minister of Finance, Carole James in Victoria to advance this position. Sam addressed the valuable impact of creative tech studios in smaller communities, and Graham emphasized the positive spinoff effects of technology and talent from video game studios into more traditional sectors in the province such as mining and health care, helping advance more rapidly than were we not a video game hub. Peter talked about the growth of homegrown video game studios and the potential to develop and produce unique IP in BC for a global audience. Brenda then spoke about the importance of the sector and the competitive threats we are facing. The Minster was engaged and asked informed questions but made no commitment to our recommendations. We will know more on February 19th when the budget is announced. Now is a great time to contact your local representative and let them know you are in their riding and care about these issues!

Thank you to Sam, Graham, and Peter for making the trek to Victoria and supporting DigiBC in this important pitch.