Advocating for fairness with the Canadian Media Fund

While B.C. makes up about 30% of the video game and interactive digital media (IDM) talent and 29% of the IDM studios, we historically receive significantly less than 30% of the national CMF Experimental Stream fund, averaging only 16% over a seven-year period. Even more concerning is that percentage is in steady decline.

Multiple issues about the CMF have been raised to DigiBC. These include a perception that the CMF is biased towards the east, CMF staff do not understand the IDM sector, and that applying is not worth the effort due to the high rejection rate of BC-based companies.

The IDM sector in B.C. deserves better and DigiBC is currently finalizing a report which is going out to the CMF, government, and industry. This report draws on analytics from the CMF’s own data showing that B.C. is significantly underserved by this so-called “national fund”. We are calling for change.

Do you have a CMF experience you would like to share with us (positive or negative)? Please write to brenda@digibc.org. 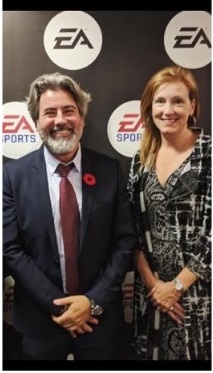 DigiBC is working diligently to move our IDMTC recommendations forward prior to the 2019 Budget. In addition to this, DigiBC is working with federal government partners on issues of relevance for our members.

Executive Director, Brenda Bailey, was able to tour EA Vancouver with the Honourable Pablo Rodriguez, Minister of Canadian Heritage and Multiculturalism. Originally from Argentina, Minister Rodriguez was delighted to meet some of the FIFA team, gain insight by witnessing the gameplay team in action and attend a FIFA 2020 mocap session. It is important for the Minister of Heritage to understand the value the IDM sector brings to Canada, not only from a culture and heritage perspective but also because the Canada Media Fund (CMF) falls under his portfolio.