We had a great time in Victoria last month celebrating #CreativeIndustriesWeek! An amazing job was done by Creative BC making this event happen and working continuously to promote and grow the creative sector.

The event kicked off for DigiBC with an evening reception held at The Union Club,co-hostedbyR2D2thanks to Industrial Light and Magic, where members of government were given the opportunity to test out Finger Food’s Cirque du Soleil VR experience. Also on the program for the night was a screening of Ana de Lara’s Good Girls Don’t, winner of the 2017 MPPIA Short Film Award, and a soulful performance by emerging artist, Maya Rae.

The following day saw DigiBC join other members from the creative tech industry, such as MPA Canada, Fox Studios, and Warner Studios, for the BC Creative Industries Showcase in the Reception Hall of Honour at the BC Parliament Building. Codename Entertainment represented DigiBC with a demo of their game, Idle Champions of the Forgotten Realms. Deadpool was on hand (everyone’s favourite merc with a mouth), and R2D2 continued to capture the crowd's attention, including The Honourable John Horgan as he made his way through the group to address the room to put forth the official proclamation of ‘Creative Industries Week’ from April 23-30, 2018. Prem Gill, CEO of Creative BC, emceed the program which saw short speeches by The Honourable Bruce Ralston, Minister of Jobs, Trade and Technology, Joan Miller, Vancouver Island North Film Commission and President of the Regional Film Commissions Association, among others.

Job growth and career pathways were the prominent themes of the event which was highlighted by the attendance of high school students who were given an inside look at some of the exciting, creative careers available to them right here in their home province. With BC’s digital media companies employing 16,500 people and contributing $2.3 billion to the economy each year they are sure to find something to suit and help keep BC’s creative industry thriving.

We’d like to give a big shout out to Finger Food Studios and Codename Entertainment for representing DigiBC and helping our political partners better understand our sector. 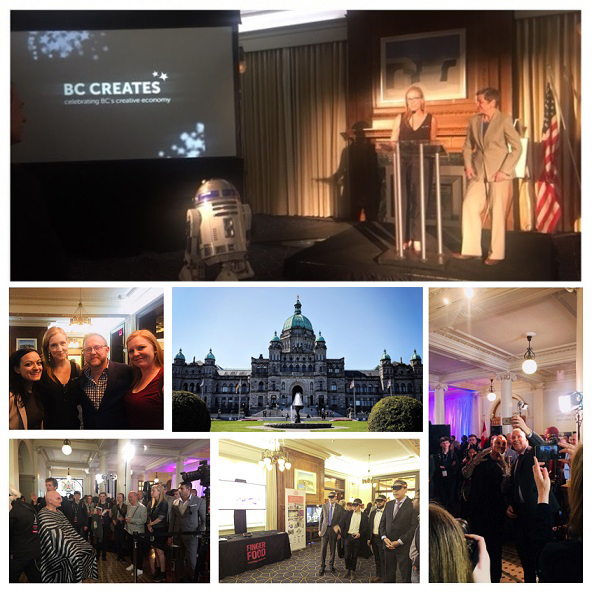