Wednesday, September 19 saw the arrival of the second delegation of Korean mixed reality developers to come and visit BC as part of the three-year digital media action plan signed between DigiBC and Gyeonggi Content Agency (GCA). This plan was signed back in January 2018 during Premier John Horgan's trade mission to Asia and is a key focus of the sister province relationship between BC and Gyeonggi - now in its tenth year. The delegation was part of GCA's Global Collaboration Project, through which Korean mixed reality startups visit three key global mixed reality hubs to explore real business cooperation with companies in those markets. BC has been identified as one of the partner hubs, alongside New York and Manchester, UK.

The delegation of five companies spent nearly two weeks in BC and participated in the VR AR Global Summit, the Women in XR Fund reception, VIFF Immersed, and then conducted their own series of meetings with local companies. They set up a temporary base of operations within the BC Tech Cube and over the course of the two weeks, participated in at least 100 meetings and entered into over twenty initial MOU-stage agreements with a variety of BC-based MR companies. Skeptics might argue that the number of MOU's signed during an international mission is not necessarily the best criteria for judging the success or failure of the activity, but in this case, I am confident that the types and quality of partnerships discussed will lead to real business outcomes of benefit to both the Korean and BC companies and ultimately, to the strength of the partnership we are trying to foster between our provinces.

While the companies in the delegation spanned a cross-section of industries currently utilizing mixed reality technologies, all of them had interesting technology and solutions and found real traction in their discussions with potential partners. Importantly, I think all delegates left with an understanding of the pros (and some of the cons) of doing business in the MR sector in BC.

Gyeonggi Province boasts exceptionally impressive digital media and MR incubation and accelerator facilities in the heart of the digital media industry in Korea and these are open to both Korean and overseas companies. We are planning a visit to these facilities prior to or just after the G-Star Conference in Busan this November. Any DigiBC member companies interested in finding out more about this activity can contact James Hursthouse (jameshursthouse@gmail.com) for more information. 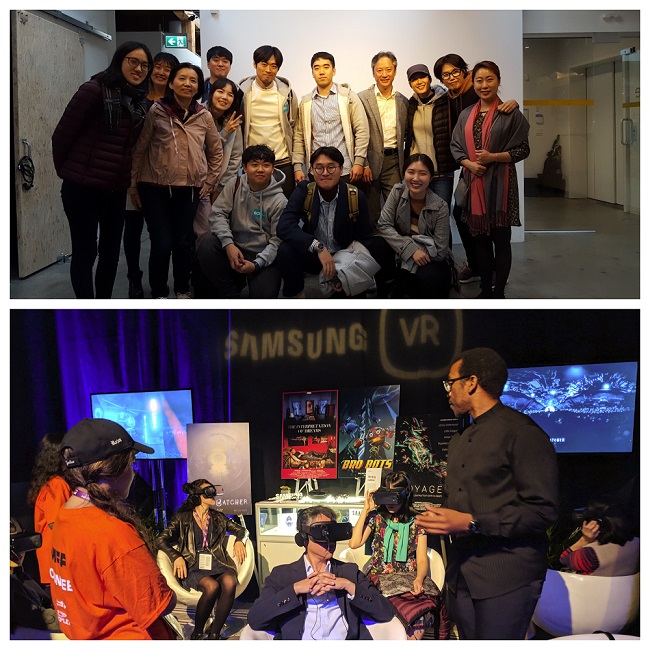 Top: various members of the GCP Korean delegation who visited BC in September 2018

Bottom: members of the GCP Korean delegation enjoy one of the exhibits at the VIFF Immersed opening gala at the Centre for Digital Media
Share
|   Permalink