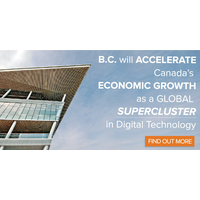 Vancouver, British Columbia, June 21, 2017. Today, BC’s leading technology organizations announced the release of a commissioned report: British Columbia’s Digital Technology Supercluster. The report was prepared by Deloitte, with the support of the BC Tech Association, the Research Universities’ Council of BC, Wavefront and the Chief Advisor of the Innovation Network, Dr. Santa Ono. The purpose of this report is to serve as a key input to the national discussion on creating world-leading superclusters and partnerships in Canada.

The report, a combination of publicly available sources and interviews with industry leaders, highlights the fundamental attributes of BC’s strengths and capabilities that position the province to become a global digital technology supercluster.

BC is home to a vibrant, diverse and successful technology-enabled economy that has been building momentum since the 1960s.

Looking ahead, BC can create a global supercluster and give Canada a globally competitive advantage by applying its strengths in digital technology to industries and creating the digital jobs of the future.

BC has the opportunity to forge the path to exponential growth

The foundations of BC’s core technology platforms, such as data connectivity, data analytics and data visualization, will accelerate the digital economy and propel exponential growth. BC-based companies such as Microsoft, Sony, Archiact, LNG Studios and Finger Food Studios, for example, will help capture the economic opportunity and exponential market growth of augmented reality/virtual reality, which is expected to grow globally from less than $5 billion in 2016 to $150 billion by 2020.

Digital technology platforms will radically transform traditional industries and fundamentally reshape the manner in which these industries operate. For example: The Natural Resources industries are transforming into environment and resource tech with augmented and virtual reality technologies that are already enabling mines of the future, while remotely connected sensors and visualization technologies are helping to improve forest health. Another example is how the transportation and industrial sectors are transforming into smart infrastructure and transportation with IoT, data collection platforms and visualization technologies changing city planning, emergency response and critical infrastructure (i.e. parking lots).

BC has the opportunity to lead in collaborations across Canada

Starting from the West Coast, BC can initiate and engage companies, innovators and hubs across the country, enabling a competitive advantage for the future of Canadian industries. Nationwide collaborations include: BC’s digital entertainment companies (which are actively collaborating with similar centres in Quebec and other areas of Canada); Wavefront (which is headquartered in BC and has created a nationally connected IoT network of companies generating and sharing innovation across Canada); Boeing (which is using its BC-based analytics centres to support efficient advanced manufacturing centres in Manitoba, Ontario and Quebec) and BC Cancer and Life Sciences BC (which are driving genomic research collaboration with counterparts across Canada).

“The future holds great promise for Canada providing we make the kinds of investments that will pay large dividends,” said Dr. Ono, the Chief Advisor of the Innovation Network. “BC’s digital technology supercluster combines complementary strengths in sectors in which we uniquely excel. With strategic investments and working with civil society, universities, governments at all levels and industry, this cluster will propel BC and Canada’s competitive advantages to rival the world’s top global innovation ecosystems.”

“BC is well-positioned to lead Canada’s next chapter of economic growth and global competitiveness,” said Bill Tam, CEO, BC Tech Association. “The unique combination of BC’s digital technology strengths and leadership in the areas of natural resources, healthcare, transportation, infrastructure and creative entertainment offers the potential for a supercluster that can transform traditional industries and lead the world.”

"In an increasingly competitive and technology-driven global economy, BC’s innovation leadership can accelerate Canada’s economic strengths and position us to effectively leverage opportunities in the Cascadia Innovation Corridor,” said Greg D’Avignon, President and CEO of the Business Council of British Columbia. “A digital cluster will ensure global excellence and growth for leading enterprises in natural resources, transportation and personalized medicine, contributing to a healthier world economically, physically and environmentally.”

A digital technology supercluster has the potential to bolster the collaboration between industry, academic, and public-sector organizations. This will create a stronger Canadian innovation ecosystem, increase industry-led research and development, enhance competitive advantage in Canada’s core industries and expand exports and international business opportunities through BC’s strong connections to Asia, Cascadia and the US West Coast.

Please review the report on SlideShare or download it here.

About BC Tech Association

The BC Tech Association is guided by our mission to make BC the best place to grow a tech company. For more than 20 years, BC Tech has been providing opportunities for the tech industry to collaborate, learn and grow together. We are dedicated to connecting companies, developing talent, sharing stories and advocating on behalf of tech companies to keep our industry thriving.

Since our founding in 1993, the tech industry has quintupled to nearly $25 billion in revenue. In that time, we have played a privileged role in supporting the growth of the tech community that now includes over 9,000 companies, employing more than 90,000 people and that has been one of the strongest contributors to BC’s economic growth over the past decade.

About Research Universities’ Council of BC

RUCBC works with and on behalf of its members to improve the quality, accessibility and coordination of university education in British Columbia. The Council provides a single voice on behalf of the six major universities on public policy issues including funding, research, accountability, admissions and transfer. RUCBC is funded by the member universities (UBC, SFU, UVic, UNBC, TRU and RRU).

Wavefront is Canada’s leader in transforming business through mobile and IoT innovation. We are a centre for commercialization for companies in the wireless and IoT technologies space. Our vision is to build a globally relevant, nationally connected ecosystem that delivers digital capacity, competitiveness and prosperity for Canadians.

Chief Advisor of the Innovation Network

In January 2017, Dr. Santa Ono was named Chief Advisor of the Innovation Network designed to foster greater collaboration between public post-secondary institutions and innovation-driven industries in British Columbia. Dr. Ono is the President of The University of British Columbia, a top-40 research university, driving key innovation clusters. Globally connected, UBC attracts approximately $600 million in research funding each year; UBC research and innovations has led to 200 spin-off companies and products, services and treatments that have generated an estimated $11 billion in sales.

For more information or to secure an interview, please contact Catherine Dunwoody at catherine@switchboardpr.com or 604-736-3185.