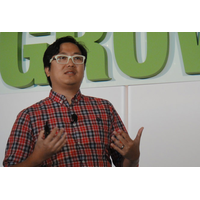 When you imagine an entrepreneur uttering these words, you probably envision them saying it with a mix of shame and embarrassment. But what if it came from a highly successful entrepreneur who confessed it—no, delcared it—casually, almost proudly, for all the world to hear?

That's exactly what happened yesterday at the Grow 2012 Conference, where Cheezeburger CEO Ben Huh emphasized product and data over design.

"We confuse good design with good product," Ben explained to the audience. He argues that the best-selling cars are not Ferraris, they're Ford Focuses. And this theory applies to the web as well: consider Craigslist, eBay, Amazon, and early versions of Facebook. They were—and some still are—decidedly ugly, but still became wildly successfuly and exalted by consumers.

DON'T MISS more tips from Grow 2012: how to raise money from strangers.

“What we’ve built at Cheezburger is to create a team of people whose sole focus is to get data,” he said. “We’ve built a company that is driven by data.” While his first argument isn't waterproof, this one is: the world's most successful tech companies, such as Google, know how important it is to collect as much data as possible from their users (legally, of course… usually). And the rest of the companies know how insightful it is to observe this data.