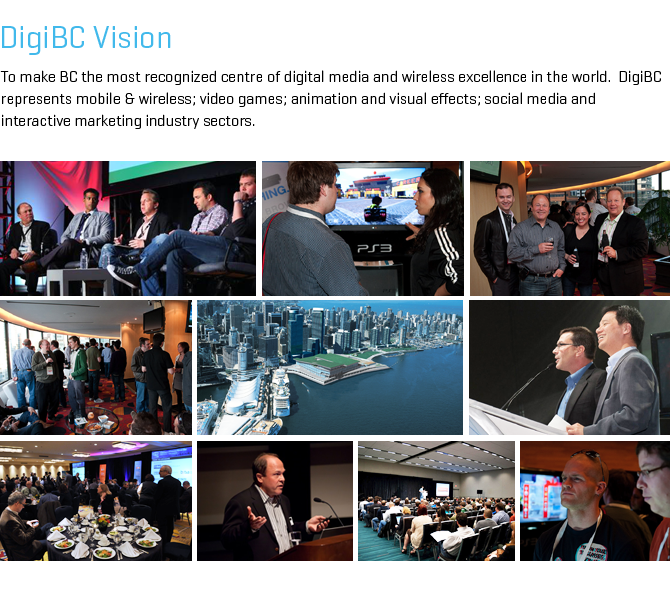 DigiBC — The Digital Media + Wireless Association of BC – is a member-supported, non-profit organization, based in Vancouver, BC Canada.

Our members include world-class companies such as EA (Electronic Arts), Disney Interactive, Rainmaker Entertainment, Nokia Vancouver, Sierra Wireless and others. There are over 1,300 companies in our sector, creating innovative products in wireless and mobile, video gaming, animation and VFX, web 2.0 and social media, interactive marketing and e-learning. Collectively, our sector employs 22,000 people and generates revenues of $3 billion a year – making us one of the most significant contributors to British Columbia’s economic well-being.

Amielle Lake is the CEO of Tagga Media, an end-to-end mobile solutions company. The company’s campaign management platform utilizes the mobile device to connect consumers to a brand’s advertising media, and provides detailed insight into consumer interactions. Prior to founding Tagga, Amielle held a range of executive marketing and corporate development roles across the software, financial services and mining market sectors. She currently sits on the boards for Mobile Marketing Association of Canada, the Forum for Women Entrepreneurs, NextMedia, and Kids Up Front.

During the past 15 years, Amir has held various management roles in the 3D animation field specializing in operations, production and business strategy. He has been with The Walt Disney Studios since 1999, working in live-action visual effects, direct-to-video animation, and theatrical feature animation. Amir moved to Vancouver in 2009 to start Pixar Canada, a wholly owned subsidiary of Pixar Animation Studios.

Brian oversees all product development activities, including product and portfolio planning and product acquisition activities, as well as financial management of the company's studio operations. Before joining Activision, Brian was responsible for studio re-structuring, online gaming and Xbox Live advertising strategies for Xbox Sports. Prior to this, Brian served on the Canadian studio executive team at Electronic Arts where he led the publisher’s partnerships in sports, racing and music.

Bruce is a practitioner in the telecommunications industry, particularly for transactions involving telecommunications infrastructure and capacity. Bruce has represented 360networks since its inception. He also represents corporations in significant technology acquisitions and with licensing transactions and other technology dispositions. Bruce has a wide range of experience representing both emerging and senior technology companies.

Since joining Blast Radius in 2000, Chris has helped the Vancouver-based digital agency grow from 50 to 500 employees across 10 offices globally. Under his leadership, Blast Radius has won accounts with some of world's top brands, including Nike, Starbucks, BMW, NIVEA and Nintendo. Blast Radius was acquired by WPP in 2007.

With 28 years at Bell Canada Greg has enjoyed a wide variety of roles including being responsible for all broadcast connectivity for the Olympics, and the design and deployment of North America’s first New York to LA digital video network. Greg is currently with Bell as the Director Telecom and Technology at the Vancouver Convention Centre.

Greg Spievak is the founder and principal of Reboot Communications, a firm that specializes in creating and delivering conferences worldwide. For the last twelve years, Mr. Spievak has worked on conferences with government agencies and international corporations in the areas of: Information Technology, Privacy and Security, Biometrics, Electronic Games, Health, Counterterrorism and Public Safety. For over twenty-five years, Mr. Spievak served in senior sales and marketing positions in the high-technology and telecommunications industries with companies such as AT&T, NCR, Xerox and 3M.

Harry Chemko is the co-founder and CEO of Elastic Path Software. Since 2000, he has grown the company to become a leader in enterprise e-commerce software, transacting billions of dollars for its clients each year. As an extension to Elastic Path’s core software business, Harry negotiated the exclusive rights to e-commerce operations for the Vancouver 2010 Olympic and Paralympic Winter Games. Elastic Path employs over 180 staff and has offices in Vancouver, BC, London, UK, and San Jose, Costa Rica.

Mr. Maynard is an accomplished business development strategist, having over 20 years of exceptional performance in a variety of demanding sales and marketing roles. Prior to Wavefront, James was the founder of VST Canada in 2002. He led its growth into Canada's largest digital narrow-casting network until VST Canada was acquired by VST International in 2004. Mr. Maynard also established Sapient Technologies Group Inc. in 1996, a business strategy consultancy for early to mid-stage technology companies. His previous experience also included roles with Wang Labs and Sun Microsystems.

James Rumble has been involved in a wide range of industries including airlines, telecoms, local search and social media and has worked in large multinationals, turnarounds and start ups. James is happiest building high growth companies in a rapidly changing environment. His career has covered operational as well as CFO roles.

John founded FCV as an interactive and digital marketing agency in 2005 with the goal of helping companies connect their brands with their customers using technology and innovation to drive results. Before FCV, John was Director of Business Development at Expedia while it rose to become a global brand and where he played a key role in the creation and growth of the private label technology platform. He was recently recognized in Vancouver’s Top 40 Under Forty, and his leadership and philanthropic endeavours earned FCV a Community Leadership Award from the British Columbia Technology Industry Association in 2010.

Kimberly Kaplan launched Offeron in early 2011. After spending 2.5 years as one of the initial employees at Plentyoffish, Kimberly wore a number of hats, but was ultimately responsible for business development and monetization. Being in on the ground floor, Kimberly gained immense insight into start-up life as well as what it takes to grow and emerge as a leader. It's this knowledge combined with her passion and drive that propelled Kimberly into her current position as CEO of Offeron.

Olivier has spent more than 20 years as a senior executive in the technology and local search directory industry in several continents. He recently was the founder, President and Chief Executive Officer of Canpages, which was founded in 2006 with HM Capital Partners and sold in 2010 to Yellow Media. In January 2010, Olivier was appointed CEO of Ziplocal, one of the fastest growing local search and directory companies in the US. Olivier also worked for Verizon International in Europe, North and Latin America and Asia for several years.

Owen Matthews is an Executive Vice President at Wesley Clover. In this role, Owen is responsible for strategy and business development activities for the Wesley Clover portfolio, both domestically and internationally. Prior to his position at Wesley Clover, Owen was the founder and CEO of Newheights Software. Newheights was a pioneer in enterprise unified communication products.As CEO of Newheights, Owen was responsible for all aspects of the business. Achievements worth noting include OEM agreements with major enterprise communication system vendors, carrier equipment manufacturers and direct agreements with telephone companies.

V. Paul Lee is Managing General Partner of Vanedge Capital Partners Ltd. Lee is the former President of EA where he was responsible for one of the world’s largest entertainment studios. In 1989, he invested in and joined Distinctive Software, which EA acquired in 1991. Lee has received numerous business honours, including: 1994, one of Business in Vancouver’s "40 under 40" business leaders; 2002, BCTIA Person of the Year.

Most recently, Pauline was Senior Vice President & Chief Operating Officer for EA SPORTS, one of the largest sports entertainment brands in the world, where she was responsible for strategic planning, business development, oversight and execution of business operating plans across all of EA SPORTS. She also drove EA SPORTS’ online presence and portfolio, stewarding its transition from console to social, micro-transaction, virtual-goods based gaming. Prior to that, Pauline was Senior Vice President and General Manager of EA Canada for 3 years. Prior to joining EA in 1996, Pauline spent over 10 years in the data communication and telecoms hi-tech industry, in roles ranging from software engineering to heading up research & development.

Rick Griffiths is a CA and an incorporated partner in the Technology, InfoCom, Entertainment and Media Group in PricewaterhouseCoopers, Vancouver. He has a strong knowledge of developing industry issues, nationally and internationally, and is sought out by Canadian and foreign governments considering economic development in those industries. His clients include start-ups, venture capital funds and public and private commercial enterprises.

Robert Forget started in the business development group at Vecima Networks Inc. in 2004 and is currently Vecima’s Director of Wireless Sales. Robert ran his own consulting firm from 2000-2004, specializing in electronics design and systems implementation. Mr. Forget has been active on the boards of many organizations from such diverse areas as housing developments, politics, and the church.

Sandy has been working in the digital marketing industry pretty much since there was one. In 1996, Sandy co-Founded Peachtree Network, Canada's first national online grocery shopping network. In 2003 Sandy joined Fjord West as General Manager, and over the next 7 years, turned it into Western Canada's fastest growing digital shop. In his secret other life, Sandy goes by DJ Pescatore, and has played to crowds across Canada, the US and Italy. On a good day, he can juggle four tennis balls.

Founder of YourTechOnline.com that became the #1 ranked Online Tech Support Company in North America beating out Best Buy's Geek Squad. The company was acquired by support.com, a San Francisco Bay Area company (NASDAQ: SPRT) in 2008. After living in the Bay Area, Steve returned to Canada and became active in the Canadian technology startup community by starting Metabridge in Kelowna, an initiative designed to provide small Canadian technology startups direct connection and access to capital and key technology players in the Bay Area. Steve has recently co-founded a new startup called Karackter, a 3D animated security product for social relationships.

Tom has held various senior product leadership roles with Nokia since 1998. He started as a Product Manager for in-car telematics products in Germany from where he moved to US to head regional product management for early entertainment focused smartphones. Since 2004, he has lived and worked in Vancouver. During these years his global team has been instrumental in building the Nokia Nseries range of smartphones with some industry icons like the Nokia N95. In 2009, Tom was part of the management team that transitioned Nokia Vancouver to become a leading SW development site for Nokia's application store and application ecosystem.

Vince co-founded airG in 2000 and has been instrumental in creating the company vision, strategic direction and technology transfer that has brought a highly successful mobile social entertainment product line to market. He has led the product integration team in over 200 seamless integrations with more than 100 mobile operators worldwide, and managed the architectural design of billing systems and operational processes for product development and deployment. Vincent is an SFU grad and is also a director of Wavefront – The Canadian Centre for Excellence in Wireless Commercialization.

Warren Franklin has over twenty years experience managing studio operations and film production at Lucasfilm Ltd, Colossal Pictures, Cinesite, and Pinnacle Studios. He was a key member of George Lucas’ creative and management team for more than a decade, where he created Lucasfilm Entertainment Group and served as its V-P. He was named CEO of Rainmaker in July 2006, after joining the company in June 2005 to oversee its visual effects division.