The 2018 VIFF Immersed Conference & Exhibition took place from September 28 to October 2. It was a jam-packed weekend and DigiBC was on hand for many of the highly anticipated events that took place. It kicked off on Friday, September 28 with the inaugural VIFF Immersed Tech Crawl. This showcased the BC creative-tech ecosystem to visiting buyers, tech companies, and producers in the hopes of encouraging further engagement and business development opportunities. It included four stops, each presenting a company that specializes in VR paired up with a local brewery (you can’t have a ‘crawl’ without some beer on hand!). DigiBC was the first scheduled stop and we had Finger Food Studios come set up and demo their latest VR projects along with Brassneck Brewery giving out some tasty beer samples. The other stops included Vancouver Film School, Microsoft, and the BC Tech Cube with the crawl ending at TELUS Garden for the official VIP reception that included a demo from Ziva Dynamics.

The following day kicked off the VIFF Immersed two-day conference and three-day exhibition, along with a red carpet gala in the evening that featured a performance by hologram pop star, Maya Kodes. The public exhibition was presented by Samsung VR Video and offered fans first-hand engagement with a number of immersive experiences. Additionally, for the first year ever, a selection of BC content was shown to spotlight creators in the province who are pushing the boundaries of creative storytelling in VR. The conference included two full days of panel discussions and interactive workshops that focussed on connecting BC immersive content creators with key industry decision makers. DigiBC’s Executive Director, Brenda Bailey, led a discussion about the ecosystem for immersive content in BC. She was joined by Vincent McCurley of NFB Interactive, Alan Goldman of Emily Carr University and chair of The Cube, Jennifer Moss of UBC, and Nancy Basi of the Vancouver Economic Commission and VR/AR Vancouver.

Since 2014, the Vancouver International Film Festival has been exploring VR as an emerging medium for cinematic storytelling. As part of the NEXT program stream, VIFF expanded its commitment to immersive storytelling with the inaugural VIFF Immersed Conference & Exhibition. Their goal is to bring together the creative and technology sectors in order to develop a global destination event that will focus on immersive, entertainment-based storytelling and nurture ecosystem growth within BC and across Canada. This year turned out to be a huge success and we are already looking forward to seeing what VIFF Immersed 2019 will bring! 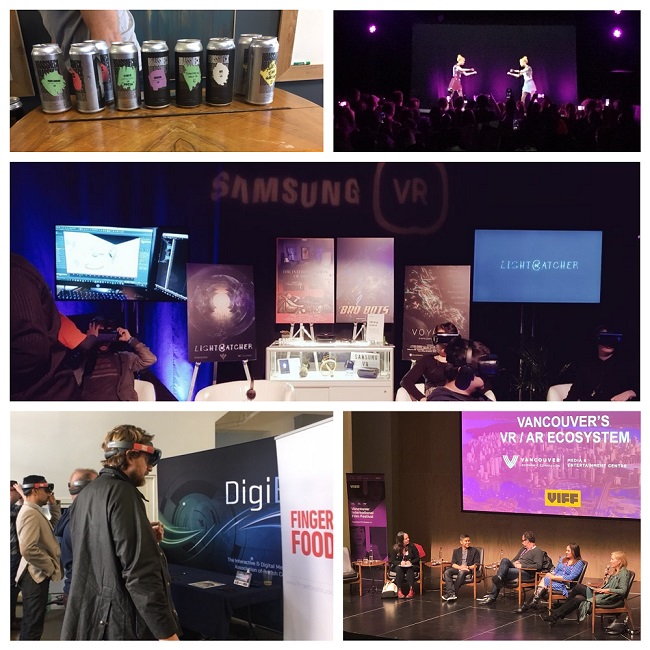