DigiBC worked with a consortium of creative industry associations on Creative Industries Week 2019 to promote and grow the creative sector in BC. We’d like to give a big shout out to Everfi and Phoenix Labs for their contributions to our presentations which helped our political partners to better understand our sector. Also, thanks to Tim Tran from Kano Apps for joining us at the Legislature, and to our board members, James Hursthouse and Catherine Warren, for making the trip over.

The event kicked off for DigiBC with the Creative Industries Showcase in the Reception Hall of Honour (Rotunda) at the BC Legislature Hall. This year’s theme was centered on ‘BC Creators & Job Creators’ to highlight the people who help power our respective sectors. The program kicked off with an incredible freestyle/spoken word performance by Prevail, followed by a number of ‘PechaKucha’ style presentations that told the story of various sector creators. The event then wrapped up with the Proclamation of Creative Industries Week in BC by The Honourable Lisa Beare, Minister of Tourism, Arts & Culture. Job growth and career pathways were prominent themes throughout the day and this was highlighted by the attendance of high school students who were given an inside look at some of the exciting careers available right here in our province. DigiBC had a few stations set up showing our DigiMusic competition, a non-traditional video game (Everlove Rose), as well as Everfi demoing the EA Play to Learn platform which DigiBC will be expanding into 60 new classrooms all over the province.

In the evening, the celebrations moved to the Canoe Brewpub for the night-time reception. A few highlights of the program included a screening of the Oscar-nominated animated short Animal Behaviour, DigiBC’s video on The Creation of a Video Game (featuring Phoenix Labs) and amazing musical performances by country star, Dallas Smith and rising artist, Shawn Austin.

The creative industries are comprised of the film, television, music, publishing, interactive & digital media sectors, and contribute an estimated $6.4 billion to the economy while providing over 90,000 jobs in the province. The government estimates there to be another 13,000 job openings by 2027 in this thriving industry. 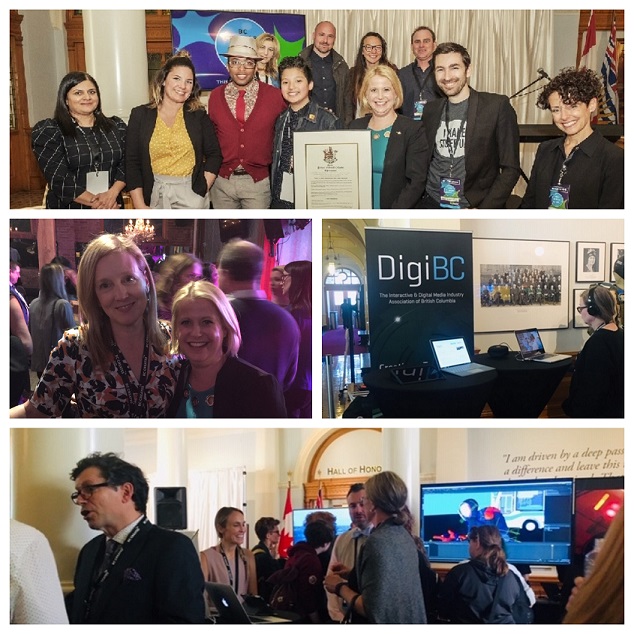